This blog post is about one of those things that writers often agonize over and that readers hardly notice. At least, if the author does a good job, there is no reason for readers to notice whether the author did the job right. But if the author flubs it... well, the reader notices all right!

I'm talking about choosing to write a story in first person or third person limited (I'm not going to discuss third person omniscient because I want to focus on only having one or two main characters, not a cast of thousands--or a dozen.) I will state up front that I do have a bit of a bias in this matter in that I do favor one over the other, though both are equally acceptable and entertaining, if done correctly. 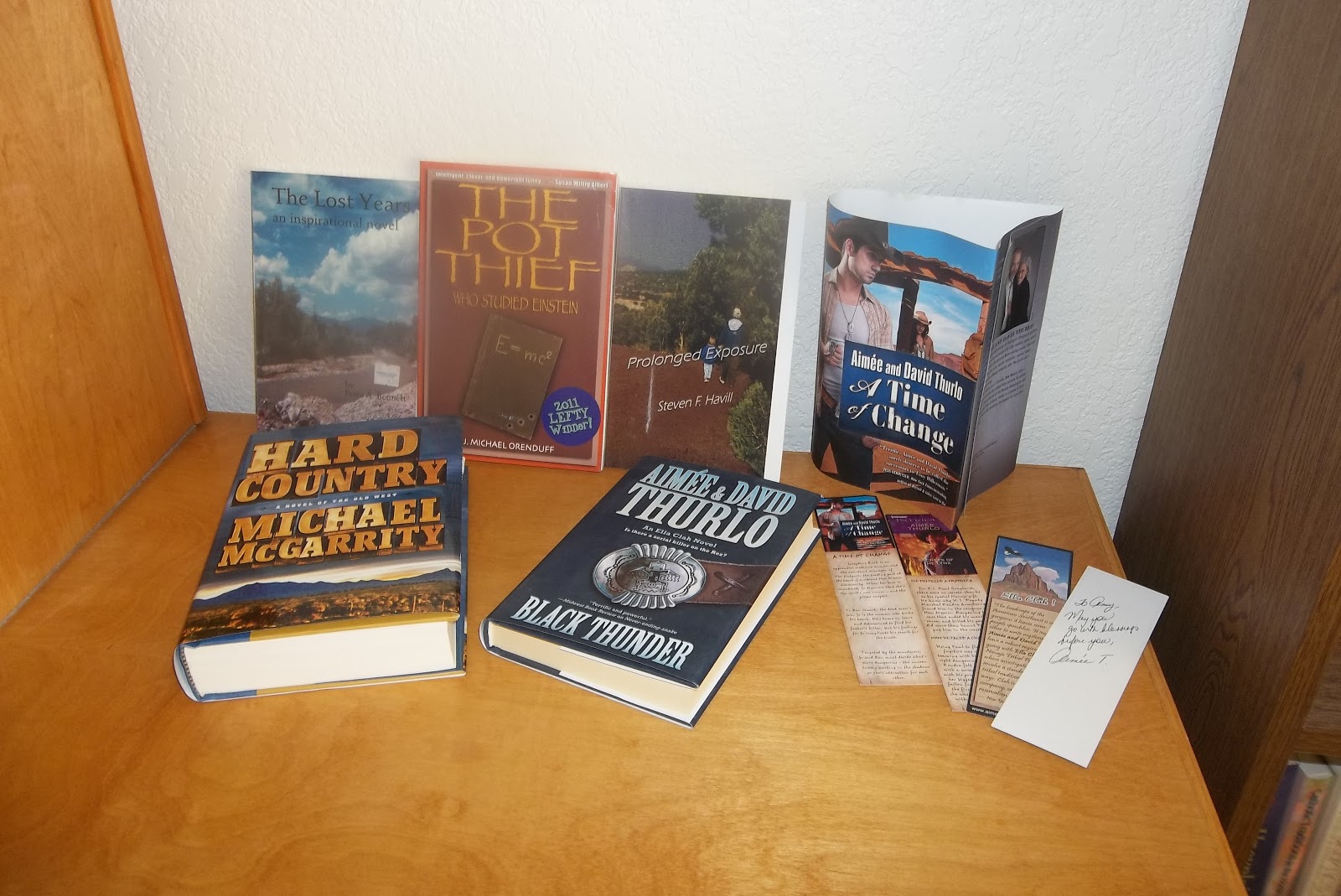 Some of my favorite authors use first... and some use third!
First person can be either the easiest or the most difficult point-of-view to use. Easy because who better to talk about what's going on than the person directly involved? Think about the times you've listened to someone tell a story about something that happened to YOU. Inevitably, there comes a time when you want to (or have to) jump in and say, "No, that's not what happened. That's not what I said. You've got it all backwards!" The first person narrator is right there, telling you the story, exactly as it happened: "I headed to the office only fifteen minutes behind schedule. Despite being narrowly creamed by a reckless guy who ran a red light two blocks from my house, I managed to get to my desk in a reasonably calm frame of mind until my phone buzzed summoning me to the boss's office for an important meeting." (Yes, I know it's awful, but go with me on this for a while!)

So far it's not bad; we're right there with the character and the story is going to unfold for us right before our (and our protagonist's) eyes, so we can really feel like we're in the story. But who IS the character? Male or female? Young or old? Where does he or she work and what does he or she do for a living? This is where the author can shine like a diamond or fall face first into the mud. How do we (meaning the author and their protagonist) talk about themselves without coming off as annoying or boring? The easiest way: "I'm Protagonist and I'm a 23-year-old intern at Prestige Law Firm, the youngest woman on the staff." Easy, but lazy. We know a few things about the protagonist, but we don't KNOW the protagonist.

So we could say, "I gritted my teeth as I glanced at the dashboard clock. Of all days to be late. The boss wanted all the interns to be on their best game today and I'd had a rough time finding a pair of stockings without a run in them and my hair and suit looked like they belonged on a frazzled mother of two-month-old twins. The truth just might set me free from this job...."

That's a little better. We've learned a bit more about the protagonist other than just gender and job. We have a hint of her age and we know a little about her life circumstances, just enough to let us know that there is something at stake (a protagonist should always have something at stake) and that something is going to happen. And it sure beats an "info dump" that reads like a police description of a suspect or the dreaded "reflecting on myself" ploy: "As I stared into the mirror at my green eyes, rimmed in red from lack of sleep, I noted that my limp chestnut hair was badly in need of a perm. I wished I had time to curl it but I was already running late and I knew my job as an intern at a prestigious law firm was dependent on me making a good impression on the boss today." Ugh. I hope that very few people in real life (VERY few) feel the need to take note of their eye and hair color whenever they look in the mirror!

Perhaps the hardest thing for a writer to remember when writing in first person is that you are only in ONE person's head: your protagonist. You can't know what the other characters are thinking (you can guess, but you don't actually KNOW.) And you can't see what's going on behind a closed door or on the other side of town. If you're on the north side of town having lunch with your spouse, you can't be on the east side of town where your mother got rear-ended by a drunk driver while leaving the bingo hall. You, the writer, know that's what's happening but you, the protagonist, don't know it until you get a call from the ER or the police and that might not happen for a while. In a way, it's a bit limiting.

That could be a good thing if you want to incorporate an element of surprise. Your readers find out what's happening right along with your protagonist. They share in the thoughts of the protagonist and wonder right along with them what's next. But it's up to the writer to remember that, unless your protagonist is clairvoyant, they have to stay in their own head and see with their own eyes. So unless your protagonist is looking in a mirror--and this is what trips a lot of writers--they can't see their own face turn red (they can feel their face get hot, but they can't see it change color!), they can't see the look of surprise on their own face, and they certainly can't see themselves "look thoughtful" (I'm not making this up; I really did read a book where the author, writing in the first person, had the protagonist say, "I looked thoughtful as I read the note on the desk." Aaaack!)

Conversely, there is one element that is NOT going to be a surprise, at least in the mystery or suspense genre, is that the protagonist survives the story in order to tell it... and yes, there IS a murder mystery in which the protagonist is poisoned and is writing the story as he is dying (must have been a very slow-acting poison), but let's not stretch it!

Which brings me to what I consider the biggest problem with first person. It's one thing to have a protagonist who is witty and amusing. But when dealing with a situation that is tense and fraught with danger, it's hard to believe that the protagonist continues to be witty and amusing while being held at gunpoint, drowning at sea, or careering down a winding mountain road at 95 mph in car with brakes that have failed (or, for that matter, when confronting a cheating significant other in a public place... like church.) And yet, how often does a story surface with a protagonist who rattles off more calm, amusing, acerbic one-liners than Bruce Willis or James Bond? Not only does it stretch incredulity (or inspire envy... don't we all wish we could come up with a snappy comeback in a stressful confrontation?) it can become tiresome. And a distraction from the main story.

Done well, as if a friend is telling us an engrossing story, first person can be a very effective way to write a novel. Next week, we'll examine third person limited point-of-view.
Posted by Amy M. Bennett at 2:31 PM