Years ago, I saw a coffee cup with the message, "I love my job, it's the work I hate!"  I have lately revamped it to say, "I love my work, it's the job I hate!"

Before I get fired, let me explain.  Many jobs have a ton of requirements that have to be met that have little to do with the actual work that the job entails.  My full-time job (besides writing and having a family life!) is as a cake decorator.  Out of an eight-hour day, perhaps two or three hours are spent doing things that are NOT actually decorating a cake.  I stock shelves, bake bread, price items, clean up, answer phones, wait on customers, etc.

As a writer, I also do a lot of work that isn't specifically writing... and a lot of writing that isn't specifically the reason I have this writing job (in case I've completely confused you, I spend a lot of time writing, not my books, but other things!)  I'd love to go to either job and just do what the job description states:  Cake decorator (decorate cakes.)  Writer (write!)  However, the real world doesn't work that way.

One thing that I can say about the writing job is that it's extremely portable.  When I'm not at the bakery, there's not much I can do to further that job.  Ditto for the winery job.  And we won't even discuss how hard it is to get laundry and dishes done when you're not home!  But writing is something that takes place in the mind long before it ever ends up on paper.  Sometimes my co-workers and friends might think I'm either in a bad mood or sad or troubled because I suddenly get quiet and seem distracted.  It's not that (well, not all the time); it just happens that I suddenly get an idea for a scene or a piece of dialogue or a storyline and I start working it out in my head (unless there is a piece of paper and a pen lying around!)

Writing has always been a portable occupation, so long as we're talking about the act of writing itself.  I used to carry paper and pen with me wherever I went, now it's more likely that I'm hauling my laptop on vacation with me.  Unlike the other jobs where I have to show up at a certain place to work, the writing isn't limited to the hours "on the clock".  If inspiration strikes somewhere, I don't have to wait to get to the office to do something about it.  And if we're just sitting around relaxing and I don't feel like reading (it's happened... well, it COULD happen!) then I can write.

What this boils down to, though, is a fact that is indisputable.  I love my writing job.  I love to write.  And even if it means that sometimes I have to go back and edit or I have to deal with marketing and promotion (I really don't know of many writers who enjoy that part of the job), in the end, it all comes down to that flow of words from the pen or keyboard.  I don't think I could write full time and then find the energy or interest to decorate cakes after the writing time is over, but I've been coming home from the "real jobs" and finding the energy, interest, and excitement to write for nearly twenty years.

No benefits, no paid vacations... but I love it anyway! 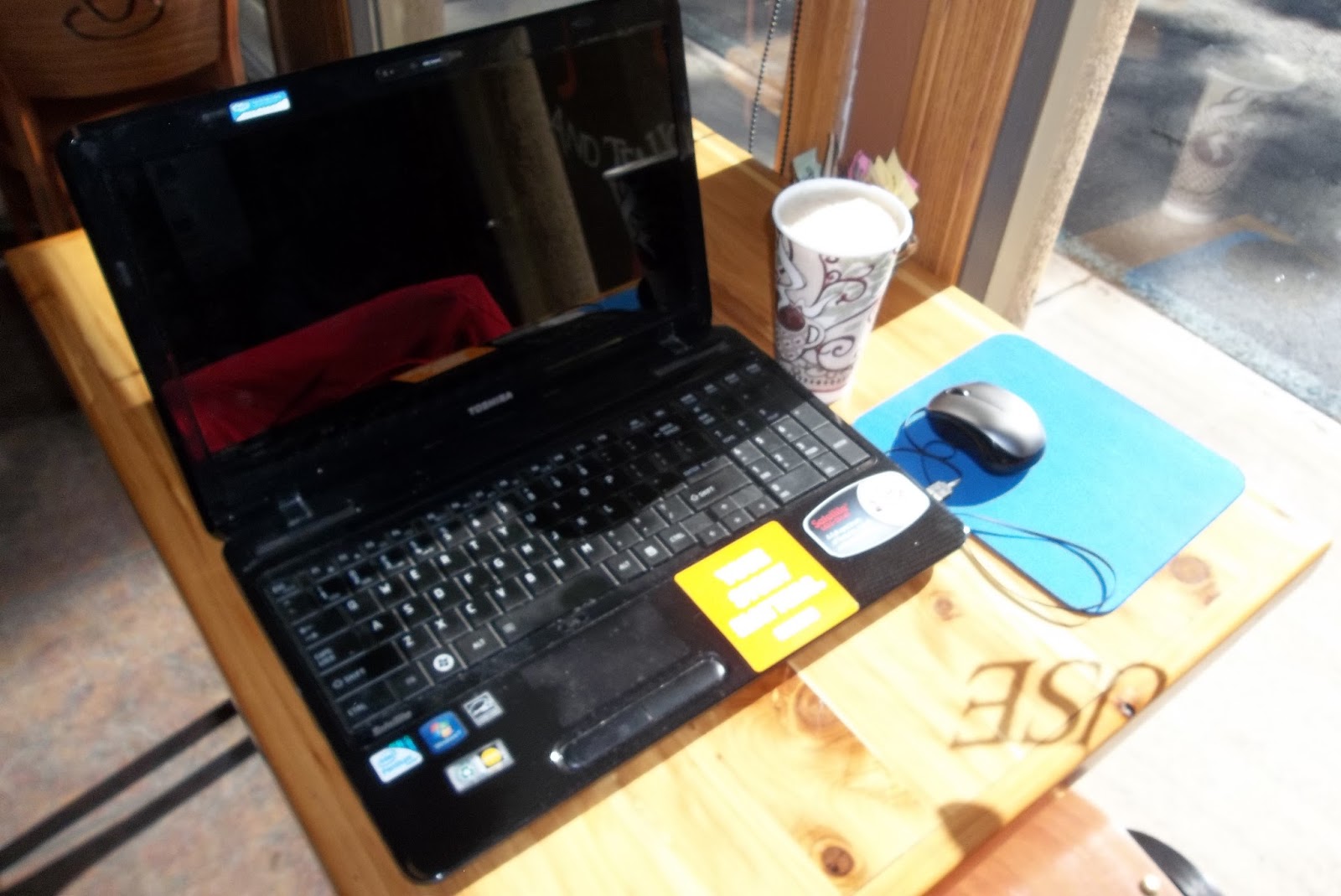 Plus, I can have coffee and snacks whenever I want!﻿

Hard to believe, isn't it?  That there was a time I didn't like wine.

Like most people, I've had to start liking things a little at a time.  Just a few years ago (less than five, actually), the height of wine sophistication for me was white zinfandel.  Beringer.  And that was IF I purchased wine or ordered it in a restaurant.  And I still don't know why I even bought it or ordered it.

At the time, I didn't even like it that much.

But because I've always had a natural curiosity about things, it wasn't unusual for me (and my husband) to try something new and go to a wine festival.  We went and had no clue whatsoever what we were doing or what we were supposed to be doing... but we had a lot of fun!

Our taste has expanded considerably from those early wine-tasting days.  Where once we hardly ventured out of the safety zone of sweet wines, our preferences have grown to include some hearty cabernets (Paul is more adventurous than I am) and crisp, acidic whites.  Whereas drinking wine was once something that bordered on being a "duty" (quit snickering), it's become an adventure and a pleasure.

Other things I had to learn to like included cooking.  Cooking wasn't something I did for fun; I did it to keep my husband and son alive.  But as time went on (and meatloaf was no longer as thrilling as it once was), I started reading cookbooks and recipe magazines and felt a stirring of excitement and adventure... much like visiting a wine fest for the first time!  Now I enjoy cooking and wish I had more time for it.

It never ceases to amaze me what I can learn to like.  I also amazes me when people refuse to try something new because they KNOW they won't like it!  How do they know?  All I know is that, while I have found myself disappointed a few times, for the most part my reaction is, "I wish I'd done this sooner!"

Bear with me... for the first few lines, I'm going to sound like a student giving her disbelieving teacher an explanation for why her assignment was a day late (and it's going to sound like, "One Direction was on TV last night!")

My son, Paul M., received the Garth Brooks boxed set for Christmas (subtitled "Five Decades of Influences") and he and my husband decided that last night would be a great time to watch the Las Vegas concert DVD.  I tried to block out the sounds from the TV room as I sat at my laptop, trying to think of a topic for my blog, but... well, to be perfectly honest, I'm a Garth Brooks fan from back in the day (heck, I'm the one who gave my son the boxed set!) and I thought I'd pop down and watch a few minutes.

Two hours later, I was heading to bed since I had to get up early to go to work, but at least I had my blog topic: influences (and, yeah, it was a pretty good show!)

All artists, whether musician, painters, writers, whatever, have been influenced by the work of other artists whom they admire.  Just as Garth could point to his musical influences (as diverse as James Taylor and KISS), I could look back over the years and see where I found my influences as a writer.

Starting in my youth, I was always attracted to two genres: mystery and history.  Of course, I read Nancy Drew (I think it's required reading for 8-year-old girls) but I really loved The Three Investigators best... I liked the diversity among the investigators.  And I liked the fact that, unlike Nancy, they didn't have a vehicle of their own at their disposal--they used their bikes a lot!

I also loved the Little House books.  I loved the way Laura Ingalls Wilder made the simple life of a pioneer girl interesting and engaging.  I really cared about all her characters and often imagined myself in the stories themselves.

As I grew older, I started reading Agatha Christie's murder mysteries.  While now I look back and see that they greatly resembled those story puzzles you used to see in Reader's Digest, I also saw how many times she really fooled me.  I also learned about how to make characters interesting (not all of hers were, despite their fame) and how to go into the mind of each character.  I also learned to pay attention to details.  Miss Marple and Hercule Poirot were forever noticing minute things that no one else ever did.  Maybe they were clues, maybe not.  But they mattered.

Now I look back over the last few years and how other writers have shaped my writing: the way Mary Higgins Clark weaves romance into her suspense and how she builds that suspense; Mike Orenduff's way of injecting humor into dangerous situations and making a likeable character who can laugh at himself; Aimee and David Thurlo's treatment of setting as a character and making you feel you are at the scene while respecting the history and culture of the characters; Steven Havill's careful research into everything he writes about, whether it's guns or piano concerts, to make them as believable as possible.

Of course there are many others, but I think that every artist needs to take a moment to tip their hat to the ones who helped shape them into the artist they have become.

Thank you very much!

This morning I posted an inspiring message on my facebook page (kind of reminds me of those locker posters we used to have in high school with the inspirational messages on them.)  It said:

A year from now you will wish you had started today.

A year always seems so long.  Next year seems so far away.  And yet, without trying to be facetious, last year was just last week.  What was it that you wanted to accomplish by this year?  Where are you now?

I won't make you answer that (yes, we're all squirming!) but let's think about it for next year.  Where do you want to be next year?  What do you want to accomplish by then?  Lose 50 lbs.?  Learn a new language or musical instrument?  Write a book?

If you start today, will you have accomplished any of those things by next year?  Maybe.  But more likely, not completely.  But even if you don't lose all 50 lbs., by exercising and eating better, you will still be healthier, right?  And if you're not completely fluent in a new language or ready to play Carnegie Hall with your violin or piano, you'll still be better than you were when you started.  And that book?  Maybe you won't have a publishing contract or a New York Times best-seller, but 50,000 words or more than a blank page is a good start.

Yesterday was my one-year anniversary of signing my book contract with Oak Tree Press.  It didn't happen the day I decided to be a writer.  Many years, many pages, many rejections letters, and many disappointments and setbacks happened before that day came.  But it never would have come if I hadn't made that decision that day, God only knows the date now, to begin.  It's the same for anything else we want to accomplish,.  We have to get started.

So whatever it is you want to have accomplished by 2015, start today.  Yes, 2014 just started, but six days have already gone by.  The next 259 are going to fly by.  Be further by then than you are today.

Get started.
Posted by Amy M. Bennett at 6:35 PM No comments: