For some, the holiday season is a never-ending time of joy. The parties, the decorating, the music, the gifts, the food... it all inspires a near-rapturous sense of happiness.

Then there are those that absolutely loathe the holiday season... and for pretty much the same reasons.

I fall a little in between.

Don't get me wrong; I am not a Scrooge that declares Christmas to be a humbug. What I deplore is the greedy commercialism that the holidays seem to be inspire more so that peace on earth. Just ask anyone who feels the pressure to be everywhere and do everything in the space of about three weeks. And forget "goodwill towards men" if those men happen to be after the same last fill-in-the-blank gift item that you need in order to ensure a "merry Christmas" for whoever is on the gift list that ONLY wants THAT item.

I don't mind the gift shopping, the cooking, the merriment. What I don't like is the sense of almost "obligation" to fulfill every material desire, have the most perfectly decorated house, and prepare twenty different kinds of cookies and/or foods in order to do the holidays "right".

This is one of those years that the Christmas season "got away from me"... if you look at my house. We didn't do a tree this year. Or lights. Or much of any kind of decorating. Christmas cards? Pffft. Right. And between not having 1) a freezer (mine conked out two summers ago) and 2) time, I didn't do any baking. So no one is getting a platter with a dozen each of ten different kinds of cookies and loaf of cranberry pumpkin bread. Not even my own family.

What DID happen this year? Well, we finally took the time to celebrate the Feast of Our Lady of Guadalupe with the community that we've always wanted to do except for never having the time to do so. Instead of preparing a twelve-course meal for a select few, we prepared a couple of potluck dishes we shared with the entire community including the local clergy and the bishop... and made a few friends in the process. Instead of spending my days off from work baking like mad and hating the cleanup, I bought a couple of packages of Christmas cookies from the bakery (the more expensive ones that probably ended up costing less than actually baking the same thing at home) and spent time visiting with the recipients and enjoying the treats with them rather than dropping them off and madly dashing off to the next obligation. And instead of worrying about making sure I'm checking off everything on everyone's wish list, I'm taking the time to focus on the true meaning of the season and making a gift of myself to others and to God. That means not giving what's left over of my good will and peace of mind after wringing myself out over the material stuff... it's giving the best of myself, whenever it's needed.

So maybe next year I'll put the tree and lights up, or maybe I'll have time and space to bake like mad. And that will be good, too. Maybe I'll make the community potluck again, or maybe I'll be somewhere else. What matters most is finding the spirit of the season no matter what I do and being a gift of peace and goodwill to whomever I meet.

Have a blessed Christmas! 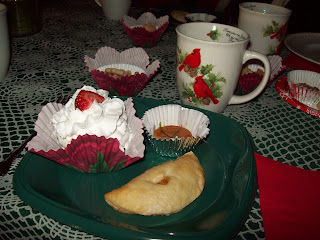 Inside the cup, the text reads, "Through the years we all will be together".
Posted by Amy M. Bennett at 1:00 AM 2 comments:

Everyone has something they really want for Christmas. Writers are no exception. However, writers want things that make most people question their (the writer's) sanity.

Between the Christmas parties, the cooking, the shopping, and, oh yeah, the real-world job, most writers can barely find the time to breathe, let alone write. Please don't feel you're leaving us out if you don't invite us to your third-cousin's great-grandniece's Christmas concert. Offer us a gift card to our favorite coffee house and help us get away for a while!

That's kind of a big deal, whether you already have a publisher or not. 'Tis the season for them to start planning their upcoming publication schedule for the coming year. It's nice to know you have a place on it! True, this isn't something just anyone can pick up at the mall, but wish along with us now!

The gift that keeps on giving. Save your money on the pen set or the coffee cup warmer (we're used to cold coffee... and besides, God invented microwave ovens for a reason.) You can even buy YOURSELF a present with the money you save AND make a writer happy! Win-win!

You deserve a gift. Books make great gifts. Book sales make wonderful gifts to a writer. What else is there to say?

This is only a small sample. Writers are very easy to please. We don't really need something expensive. Just knowing that someone enjoys our work is enough to make us smile all year long! 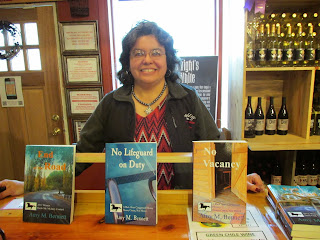 Christmas in the Southwest

There's something special about the holidays in the Southwest. Of course, the holidays are special no matter where you are, but because I grew up in El Paso, Texas and have lived in New Mexico almost all of my adult life, I have a different perspective of the holidays than folks who have grown up in other areas of the country.

Most cultural depictions of Christmas include snowy scenes. We get snow in New Mexico, but not much and sometimes more likely in January than December. We are far more likely to have a "brown" Christmas and a "white" Easter than a White Christmas!

Christmas caroling is not as common; here, the predominant tradition is Posadas, a Mexican custom of the re-enactment of Mary and Joseph seeking lodging before the birth of Jesus. This usually begins on the 16th of the month and goes on nightly for the next nine nights, culminating in the Christmas celebration when Mary and Joseph are given shelter and Jesus is born. Lots of food and a pinata for the kids mark the end of the festivities.

Because of the strong Hispanic-Catholic influence, another holiday observance is that of Our Lady of Guadalupe on the 12th of December. The holiday honors the visit of the Virgin Mary to an Indian, Juan Diego (now a canonized saint in the Catholic Church), in 1531 which resulted in one of the oldest Christian artifacts in the New World--an image of the Virgin on Juan Diego's cloak which is still on display on the Basilica in Mexico City. This feast day is celebrated with dances, religious services, processions, and lots of food.

The holidays, or at least the Christmas observance, usually ends on Christmas Day, but in the Catholic Hispanic tradition, the Christmas celebration BEGINS on December 25th and goes through January 6th (the twelve days of Christmas!) which is when the Dia de Los Reyes Magos (Three Kings' Day) is celebrated. On that day, gifts are given (after leaving hay and carrots for the camels of the three kings, who brought the first gifts to the Christ Child) and the celebrants partake of a yeast coffee cake called a rosca de los reyes, or crown of the kings. It's decorated with colorful sugar and fruit and baked into the dough is a small figure of Baby Jesus. Whoever gets the piece with figurine wins an extra gift and the privilege of hosting another party on February 2 (the Feast of the Presentation of Jesus in the Temple.)

For me, the holiday season has always been a season, with some special day occurring almost every week. Regardless of what is being celebrated, the common denominators are always food and family... two of my favorite things!

Happy Holidays... all of them! 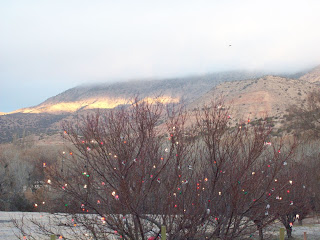