There's One in Every Family....

I've often said that characters in a work of fiction come to feel like family to the reader. This is even more true for an author who lives and breathes in these characters for months or years at a time. And for those of you with short memories, yes, I do write murder mysteries, but let's leave that aside for the moment.

In every family--indeed, any group of people like friends, co-workers, classmates--you have certain types that seem to have a place in the group. You can call them archetypes, or stock characters, but I call them, "that one in every family". I'm not necessarily talking about the main characters, commonly referred to as "the hero", "the heroine", "the villain", or "the sidekick", but more the secondary characters that add a lot of color and depth to the story. While I'm going to focus on my own Black Horse Campground series, look around the book you're currently reading (or the Thanksgiving table later this year) and see if you agree:

The Best Friend--I'm starting with this one because one of MY real-life best friends confessed that she couldn't stand my main character, Corrie's, best friend, Shelli:

You know I really hate women like Shelli they remember everything and are always reminding you of all the stupid things you have done in your past!! lol they talk to much too.

And yet, they have always been there, haven't they? And their reminders of what happened in the past usually serve to remind our hero/ine that they made it through before and they can do it again! Besides, who else is the hero/ine going to talk to about the stuff they're not supposed to be talking about to the other characters?

The Busybody--In the old TV series, "Bewitched", Gladys Kravitz was the nosy lady across the street who was always peeking through her curtains to see what the neighbors were up to. In a murder mystery, what better character type to witness something they shouldn't and stir up trouble by gossiping about what they saw? And, if necessary, they make a convenient murder victim! Not to worry, BHC fans, I'm not planning to do away with Rosemary Westlake or Dana Myers... yet.

The Thorn in the Side--Not really an enemy, not really a villain, just a character that shows up, usually at the most inopportune time, to give the hero/ine a low-grade migraine just when they need to be on top of their game. It can be that kid from grade school that always made fun of you (think Nellie Olsen in the "Little House" book and TV series) or the ex that can't seem to let the past stay in the past (Meghan, Sheriff Rick Sutton's ex in my series). Again, they might make convenient murder victims (as has been suggested to me numerous times as a way to resolve the Rick-Corrie-J.D. triangle) but complications help build a better story.

The "Femme Fatale"--Okay, this one I play for laughs, mostly, in my Black Horse Campground series--Dee Dee Simpson is more Naomi from "Mama's Family" than she is Alexis Carrington of "Dynasty". She makes the men blush and the women roll their eyes, but she's really got a heart of gold and wants to help however she can. Some might call her "trashy" because she "wears her clothes too tight and her hair is dyed", to quote the song by Confederate Railroad, but Dee Dee doesn't see herself that way and her opinion is the only one that matters to her!

The Wise One--There's always one character every other one seems to be able to go to for advice or to find a sympathetic ear. In the TV series "NCIS", it could be "Ducky" Mallard or Mike Franks. In the Black Horse Campground series, it's Corrie's long-time friend and surrogate aunt, Jackie Page, who always has good advice, or Myra Kaydahzinne's grandmother, in "No Vacancy", who conveys important information and gives the main character encouragement in dark times.

There are many, many others that I could enumerate, but these are the ones who seem to appear in almost every storyline, whether a book, movie, or television show... and, of course, in real life. 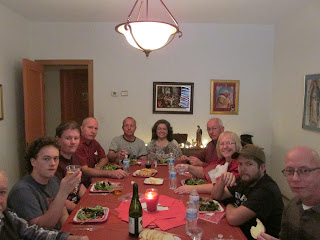