When I first started thinking about becoming a mystery writer, I discovered that there are two different types of mysteries... those that are plot-driven and those that are character-driven. In the plot-driven mystery, it's the puzzle, the "whodunit", that drives the story. The characters, while engaging, are merely along to solve the puzzle. Agatha Christie mysteries are the archetype of a plot-driven story: Poirot and Miss Marple don't change much from one book to the next, no matter what kind of mystery they investigate or what happens to them.

I'm a huge fan of mystery series, which is one of the reasons why I decided to write one. Another reason is that I love to watch characters grow and develop. Whenever I finish a "stand-alone" book, I always find myself wondering what happened to the characters after the events in the book ended. DID they live happily ever after? How did they deal with other changes in their lives? Were there other adventures we would like to hear about?

The first book in a series is like the pilot of a long-running TV show. About the only show I watch regularly is "NCIS". After eleven years on the air with basically the same cast members and characters, one would think that I would have gotten bored. What keeps me engaged with any characters in a series, whether on TV or in books? Watching them grow and develop as time goes on.

I've never met a parent who ever claimed that watching their child or their children grow was boring. Nail-biting, sleepless-night-inducing, tears-of-joy-producing, and never a dull moment for sure! If an author writes his or her characters correctly, it should be the same as watching a child grow.

A character starts out with the basics--name, appearance, profession, and personality, maybe a little backstory to keep him or her from being completely faceless. As time goes on, the readers--and the author!--learn more about the character and this can lead to new plot lines and new growth which leads to... you get the idea.

It's rare that a real-life person remains static and unchanging. People are affected by events in their lives and the other people they come in contact with. And they change. Sometimes for better, sometimes for worse, but there is always a change of some kind, even if it's just in their perceptions, if not in their outward appearance and actions. The same is true for characters. In order to keep readers engaged, I think it's important for the author to keep their characters as real as possible. This means allowing them to change and grow. Some authors fear that changing their characters will result in readers losing interest in the series. As in any kind of relationship, there is always that type of risk with any kind of change. But one piece of advice I received early in my writing career was this: the only characters that should not change are dead ones.

In my Black Horse Campground series, there are several changes that occur in the lives of my three main characters, Corrie, Rick, and J.D. They all react to change differently and it affects them all in different ways. It is my hope that readers will enjoy watching them grow and change as life marches on, as it does with all of us. 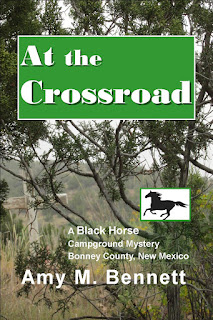