Getting a Clue: How Suspense is Built into Books and Films--A Guest Post from author Vivian Rhodes

Today's Back Deck Blog post is by Vivian Rhodes, mystery novelist and award-winning television writer. Vivian will tell us about how suspense is built into a story and also about her latest book, "If You Should Read This, Mother".

I love good suspense, whether in the form of a book, a play, or a film.  Some of my favorite authors over the years have been those who have mastered the art of keeping me in suspense: Ken Follett, Jonathan Kellerman, Gillian Flynn, and of course the Mistress of Mystery, Agatha Christie. In fact, uppermost in my mind when I wrote my latest thriller, If You Should Read This, Mother, was how to balance telling a good story while keeping readers in suspense.

As far as films go, keeping the viewer in suspense entails a bit more and no one did it better than Alfred Hitchcock.  Unfortunately, not every director was as capable as Hitchcock, and often viewers could see things coming way before they were meant to.  Of course, many viewers actually enjoy the ride and figuring out the ending early on.

Do you love watching a suspense film and knowing what’s ‘around the corner’?  Many  movies, especially the vintage ones, offer the viewer plenty of clues as to what lies ahead. The obvious cliché, of course, is the young woman in the horror film who, alone in the house, decides to go down to the basement in order to ‘investigate a noise’.

Ten giveaways that portend what is going to happen by the end of the movie:

1.   If someone is lying on his deathbed cheerfully relaying what his plans are for the immediate future, odds are there is no future in store, immediate or otherwise.

2.   If a questionable character poses the question, ‘Do you have any close family or friends, anyone who would miss you if, say, you disappeared?’ it would be best for our hero or heroine to proceed with caution.

3.   If we are only witness to a gloved hand committing a murder, the murderer is most likely a woman. (It also stands to reason that if a serial killer is not committing sex crimes, there’s a good chance that, here too, the killer is a woman.)

4.   In a mystery where someone has done something very, very evil, a look at the credits will often suggest who the heavy is even before the film has begun. (ie. Don Porter in older films and perhaps Christopher Walken in newer ones).

5.   A former bad guy who turns good and fingers his cronies will still have to die, but will die a ‘noble death’ (ie. saving the life of the heroine).

6.   If a woman lets go of her toddler’s hand for any reason (ie. to pay a cashier or to powder her nose) said toddler will inevitably wander into traffic with dire consequences.

7.   It is rarely the guy on the lower end of the food chain who is morally responsible for a crime committed. Usually the heavy is a man of influence (editor of a newspaper, politician, or corporate heavy).

8.   If a woman marries a man about whose background she knows very little, she will probably live to regret it. (This is particularly the case in films made prior to Google).

9.   If a beloved pet is introduced at the beginning of a murder mystery there is, unfortunately, a good chance that said pet will not be alive by the end of the film.

10. If a woman laughs at a furious man and he warns her to stop laughing at him, it’s a safe bet that the man, often a psychopath, will put an end to the laughing by either strangling or stabbing her to death.

Blurb for "If You Should Read This, Mother", by Vivian Rhodes

Megan Daniels was only three years old the day President John F.  Kennedy was assassinated, but flashes of that day begin to trigger other disturbing memories that have lain dormant within her.  At first they are merely snippets, but as they begin to appear more frequently Megan has difficulty separating what is real from what is imagined. In her attempt to learn more, she sets out to find her biological mother, but keeps hitting brick walls. No adoption papers exist, and all she has to go on is her possible birthday: November 22. In the small town of Meredith, CA, Megan’s search takes on a dire, domino effect—one woman has already been murdered as a result of her inquiries. As she digs for the truth, Megan eventually unravels a sinister plot that began decades earlier, but in doing so she places her own life in jeopardy. 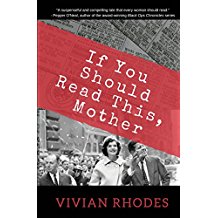 Vivian Rhodes, a graduate of Syracuse University’s Newhouse School of Communication, is a published mystery novelist and two time Emmy-nominated television writer, having written for daytime serials such as General Hospital and As the World Turns. Her Lifetime movie, Stolen from the Womb airs frequently, most recently in May 2016. Her suspense thriller, If You Should Read This, Mother is available at www.Blackopalbooks.com , and Amazon, and can be ordered through local bookstores as well. Her novel, Groomed for Murder is now available as an e-book on Amazon, Ms. Rhodes lives in Los Angeles, where she is an adjunct instructor at Cal Lutheran University. She is presently completing work on her next novel, Girl Obsessed, and writes about all things nostalgic- from film noir to vintage toys- on her blog, Rhodes Less Traveled. (VivianRhodes.blogspot.com)