How to Stay Married for 25 Years (to the same person!) and Like It

Hard to believe that tomorrow, Paul and I will be married 25 years.

We are in Santa Fe, enjoying a weekend away together and, naturally, we're doing a lot of reminiscing about that day 25 years ago when we essentially made a date to be together on the same day the following year, 10 years later, 25 years later... and hopefully 25 years from now!

I think back and honestly don't know what those two kids back then would have planned to do to celebrate this milestone... except be with each other.  We are not exactly those two kids anymore.  We've changed in ways we probably never would have imagined; taken on challenges that have changed our perception of ourselves, each other, and the world at large; learned things we never knew we were interested in, taken roads that led us in directions we'd never been before... and loved every minute of it.

I'm not saying it was always easy or that there weren't times when we wondered what in the world we'd gotten ourselves into.  But one thing we learned early on was that having someone in your corner made everything easier to deal with.  Even when we disagreed about things or had an argument, we knew that we were still on the same side, no matter how big of a bone-headed mistake we'd made.

Another thing was that we made sure never to take each other for granted.  As one gets older, it's easier to see how life has no guarantees--the person sitting across the breakfast table from you might not be there tomorrow.  But young people think they'll live forever and nothing will ever change... especially our own selves.  The sooner one learns that change is inevitable, the easier it will be to take whatever comes along in life, good or bad.

Bodies change... not always in good ways.  Ideas change.  Financial situations change. Jobs change.  Houses change.  The number of people sharing the bathroom in those houses change.  Dreams change.  But knowing that there is someone there who has always been there... someone who knew you when... someone who shares the same name, the same memories and the same hopes for the future... someone that changes right along with you and helps weather those changes... somehow it makes for a very short 25 years.

No matter what changes come up in the next 25 years, it's safe to say that the one thing I hope never changes is who will be sharing those next 25 years--and beyond--with me.

Happy anniversary, Paul! I love you! 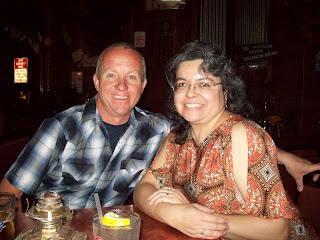