The Greatest Mystery Story of All Time (in my opinion!)

I often get asked about my favorite authors and books. Those can be hard questions to answer because I love many authors and their books. But the question, "What do you think is the greatest mystery ever written?" calls to my mind something that many people don't expect.

What do they expect? If they know my tastes in mystery novels, they're likely to name Agatha Christie. But which of her books? "Murder on the Orient Express"? "Ten Little Indians"? "The Mysterious Affair at Styles"? All stories that have a twist in solving the murder. All stories that exhibit a great deal of genius (though "Styles" made me want to throw the book across the room, yelling, "Not fair!") But neither of them are the mystery I consider the greatest one ever written.

The author? Roald Dahl. Yeah, THAT Roald Dahl, of "Charlie and the Chocolate Factory", "James and the Giant Peach", "The BFG", etc. fame. And his story that I consider the greatest mystery ever written isn't even a novel. It's a short story that was initially rejected by The New Yorker but was eventually published by Harper's Magazine in 1953. It was adapted for an episode on Alfred Hitchcock Presents (which aired in 1958) and was one of only 17 episodes directed by Hitchcock himself.

The story is "Lamb to the Slaughter". If you haven't read it, find a copy and do so. You can find the TV adaptation on YouTube. How do I tell you about the story without giving it away? What makes it the greatest mystery ever written?

It's not really even a mystery, not if you follow the true definition of a mystery. There is no "whodunnit" in this story. The reader sees the entire murder play out in front of his or her eyes, from the murderer's point of view. The horror in the story is seeing the murder and knowing what everyone else in the story doesn't know. In a nutshell: a woman discovers her policeman husband is cheating on her. She kills him and gets away with it by having her husband's police officer co-workers destroy the evidence.

I could say so much more about the story but it is brilliant and should be enjoyed by reading it in its entirety. I first stumbled across the condensed version in a copy of Reader's Digest back in the '70s (thanks, Dad!) and read it again, years later. Was that the story that sparked my interest in writing mysteries? It certainly played a part, but it also gave me the despairing knowledge that I would never write the greatest mystery story of all time. Roald Dahl had beat me to it. 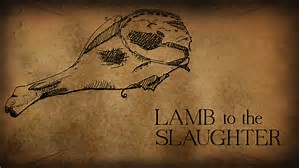