So Where DO Those Story Ideas Come From?

It's probably the most commonly asked question of writers, especially fiction writers. It seems to many people that, judging from the mind-boggling number of novels that exist, that writers are a rare species who sprout story ideas from their brains the way chickens sprout feathers.

If anyone were to take a close look at the many books out there, it becomes clear that most of them are, essentially, telling the same story: guy meets gal, they fall in love and live happily ever after (or not.) Poor person wants to become rich and famous and succeeds (or not.) Hero/ine wants to save world from evil villain and succeeds (or not.) And so on. The details change, the setting changes, even the motivations change, but the essential story is the one that is retold over and over. So finding the story ideas isn't the problem. The challenge is in finding a new, engaging way of telling the story.

At a recent book event, the question was asked, again, about how authors find their stories. The person asking was a poet who was puzzled at the way fiction writers were able to create characters and tell their stories. I'm not sure if we answered her questions in a way that made sense--novelists often find themselves becoming more and more incoherent the more we try to explain the way we work. But it's like asking a poet where their verses come from.

They come from people. Good people, bad people, sad, happy, angry, all kinds of people. And how they feel. And what they do and think. What they want and how badly they want it. Whether it's poetry or prose, fiction or non-fiction, all stories and the ideas that inspire them come from people. It's the writer's job to record it all and tell the world about these people and events and the stories they have inspired.

Granted, not everyone has the interest or the ability or desire to write down stories. That's why not everyone is a writer. But everyone has a story and many times it's the same story that someone else has... it's just that the details are different.

It's the writer that takes that ordinary story and adds the words and details that make it special. 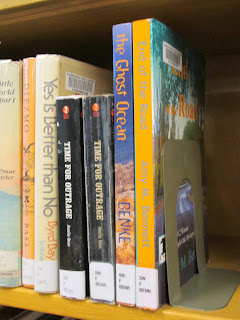