For all the positives of country living, there is one thing that can be considered a negative at this time of the year, especially if you have children.

Trick-or-treating just isn't the same when the only houses you can go to are Nana's and Tia's.

Growing up in El Paso, Texas, I lived in a typical '70s-era neighborhood, where all the dads worked and all the moms stayed home. Everyone knew everyone on the block, even the grumpy old neighbor who didn't like kids and whose yard was a black hole for any ball or kite that happened to land in it (no one dared approach the gate to ask for them back, much less give in to the dares to just jump the fence and run like crazy.) The shopping center was a block away where we could spend our twenty-five cent allowances on candy at Winn's (think Walmart on a much, MUCH smaller scale) and roller skate and ride bikes and skateboards all over the parking lot on Sundays when everything was closed (except Furr's Cafeteria where the old folks went for lunch after church.)

Back then, Halloween was a big event, but unlike these days, it was a one-day event. Costumes and black and orange decorations and huge bags of candy would show up in stores around the first of October, but they were clearly meant to be purchased for use ONLY on the thirty-first. It didn't matter what day of the week Halloween fell on--THAT was the night for trick-or-treating. THAT was the day we wore costumes to school and took orange-frosted cupcakes (homemade, of course) to share with our classmates. Decorations went up on homes only a couple of days before Halloween, and they were mostly cardboard jack-o-lanterns, black cats, bats, and witches, with an occasional skeleton hanging from a tree (if you were lucky enough to have a tree in your front yard.) No giant inflatables of haunted castles or the grim reaper. If we did carve a pumpkin, we did it Halloween afternoon because our mothers wanted to cook it as soon as we blew out the candle in it that night (yes, pumpkins were considered food as well as decorations back then.)

Trick-or-treating was a group affair, mainly because our parents wouldn't let us wander around the neighborhood alone at night (even if we did it during the day.) Often a couple of dads would accompany the group, for the purpose of preventing older kids from scaring younger kids into giving up their candy and to keep control of excited kids who would dart into the street in the eager quest to get to the house with the "good" candy. "Taking candy from strangers" took on a whole new meaning for that one night. True, we knew all the neighbors, but for that one night, clad in masks and flapping costumes and approaching houses that were dark except for the porch light, the people we knew so well became strangers to us. Stories about razor blades in apples and well-intentioned warnings about tampered candy made everyone seem like a menace (especially grumpy neighbor who, inexplicably, turned his porch light on, but kept his gate closed.) Despite the fact that we knew exactly where every piece of candy came from, parents insisted on inspecting it and getting rid of homemade treats (even when they came from neighbors who routinely gave us cookies or who were parents of kids who attended school with us and made our school party treats.) Strangely, it was the one day of the year where we didn't feel completely safe in our own neighborhood... and that was what made it exciting.

Our kids got to trick-or-treat a few times, when they were younger and we lived in town. The difference was that the neighbors really WERE strangers and my sister-in-law and I often swapped out the collected candy for the candy we bought ourselves. Once we moved to the country, Halloween was celebrated with a party and a scary movie and more treats than the kids would have gotten from going door-to-door. The fact that we don't feel as safe as we used to in our own neighborhoods as we did when I was a kid seems to have robbed a lot of the Halloween fun I remember. Lots of the scary stories we told as kids now show up on nightly news casts.

I stopped getting excited about Halloween when things took a turn more toward horror than scary. Or maybe it was when the push to get Halloween on the shelves in stores in early September was almost as ridiculous as the push to get Christmas decorations out in October. Maybe it was more fun when we were only scared ONE night out of the whole year. Either way, I still treasure the memories of when I was a kid and Halloween was a lot of innocent fun. 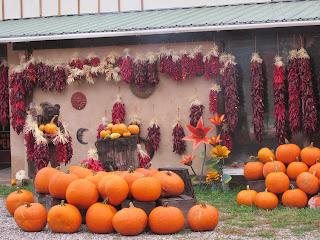 Still love the colors of the season... especially in New Mexico!