Today, The Back Deck Blog is featuring Holli Castillo, author of the Crescent City mystery series published by Oak Tree Press. She is also the unofficial poster girl for perseverance and "No excuses!" Let's get to know Holli a little better: 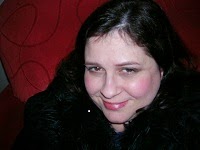 I have been a Louisiana appellate public defender since March of 2000. I quit my job as a prosecutor at the New Orleans D.A.’s Office in December of 1999 so I could stay home with my daughter, who was a few months old at the time. The appellate job was offered to me a few months later and was perfect because it allowed me to work from home. It was then that I finally decided to start seriously working on my writing career.
The first in the Crescent City Mystery Series, Gumbo Justice, was published in 2009 by Oak Tree Press. The series revolves around Ryan Murphy, a tough, spunky female prosecutor in New Orleans. She is highly competitive, a necessity to keep up with the unofficial boy’s club. She also has a big mouth, which sometimes puts her in tough spots, as well as draws the disapproval of her father, who is a police captain in one of the eight New Orleans police districts. Her brothers and her boyfriend are also NOPD. While Ryan is a pit bull of a prosecutor, she is also a magnet for trouble, particularly when she insinuates herself in situations that shouldn’t concern her. There’s always bound to be drama around Ryan, most of it self-imposed.


My road to publication was somewhat rocky. When I believed the novel was finished, which was the beginning of 2004, I researched and found agents I felt might publish my novel. I queried and received between 30 and 40 rejections. I was lucky, though, because a good deal of the rejections had notes on them for me about the reason for the rejection. Some were the standard, “So sorry, your work is not right for our agency.”
Some of the rejections, however, included notes as to why my work wasn’t right for their agency. For instance, one agent circled the word serial killer on my query and wrote, “Not for us,” next to it. Another said they didn’t handle such dark material. A third said my dialog was unbelievable.


This led me to conclude first, that I hadn’t researched agents as carefully as I had thought, and second, maybe my work wasn’t quite as ready for publication as I had thought.


At that point, I took a Writer’s Digest online novel workshop. It was designed for writers who had finished writing the novel and wanted feedback to get published. G. Micki Hayden was the teacher, and her advice proved to be extremely valuable. One of the biggest pieces of advice she offered was about my ending, which she pointed out was not going to be satisfying to the readers and thus would limit my ability to lure an agent. At the end of the course, I re-wrote the ending, changed a few things that weren’t working, and decided to start the querying process again. This was near the end of 2004.
My first step was to spend more time researching agents and publishers. This time, I chose to query mainly publishers. Honestly, the reason was because I felt I had tapped out the agent market to some extent and didn’t want to re-query agents I had already queried. This time, I bought books published by the publishers I was interested in. I realized at this step that some publishers that seemed right for me in the Writer’s Market weren’t actually right for my work in real life. Just because a publisher publishes mysteries written by new authors doesn’t mean my novel fit into what they published. The idea of specialized genres had never entered my equation before.

I was finally ready to send out the queries and did so, sending out to fewer, but more targeted, publishers, with a few agents thrown in for good measure. I received a relatively quick response from an agent requesting the manuscript. I mailed it off to her and waited.


Not too longer after that, September of 2005, Hurricane Katrina hit. Everything in New Orleans was a mess. We were fortunate in that we didn’t lose everything, but had some structural damage. No flooding at my house, but repairs had to be made and household items had to be replaced. Plus we had no phone, no internet, and no mail for quite some time. For months, we were the only family back in our neighborhood, only the men in the neighborhood returning to work. Needless to say, thoughts of writing and getting published went on the back burner for quite a while. Not to mention that having no contact with the rest of the world thing.
Finally, things got back on track. By then, I had heard back from the agent, who was no longer taking new writers due to health reasons. I had also received a request for my manuscript from Billie Johnson at Oak Tree Press, my current publisher based upon an email query. I sent her my manuscript and then waited for a response. She got back to me and said she wanted to publish it and we began to start talking timing. The book was on the calendar for summer of 2008. We discussed the cover, the blurb, and all those other good things publishers discuss with the writer.

And then, in June of 2008, three days after my oldest daughter’s ninth birthday, my two daughters and I were in a head-on collision with a drunk driver. We were scheduled to go to Alabama the next day to adopt a puppy from a rescue shelter not too far from where we had purchased an evacuation house. My first puppy, just four months old, was in the car with us as well.


The wreck delayed the publication of the novel for a year (as well as delayed getting the second puppy for several more years.) I was in the hospital for two weeks, getting titanium rods and plates put in my left thigh, left arm, and right ankle. I had over 80 staples throughout my body, burns, bruises, sprains, broken bones, including missing two inches of my femur and fracturing a lower vertebrae. I was in a wheelchair for seven months, and it was a year before I could walk, albeit with a limp. My girls were also injured, my oldest with a seatbelt laceration to her abdomen, my youngest, who was six at the time, with a broken wrist, a cut that required staples under her eye, and nerve damage to her legs that took nearly two years before she could walk and run normally again.
My doctor said I was lucky because I should have been eating out of a straw after that kind of a wreck. Two years earlier, my Jeep had been stolen and wrecked by teenage thieves, deploying the airbag. When the dealership repaired the car, apparently they neglected to fix the airbag. This turned out to be a Godsend during my collision because the airbag actually flew off with the steering wheel and landed in the seat next to me. If the airbag had deployed, my doctor believed I would have likely suffered facial injuries, internal injuries, or possibly death. I don’t consider myself lucky, although I do say I am the luckiest unlucky person in the world.


The only positive thing was that while I was laid up unable to do anything else, I spent a lot of time on the computer, doing promotion, engaging in social media and learning the online ropes. Almost exactly a year to the date of the car wreck, Gumbo Justice was published. 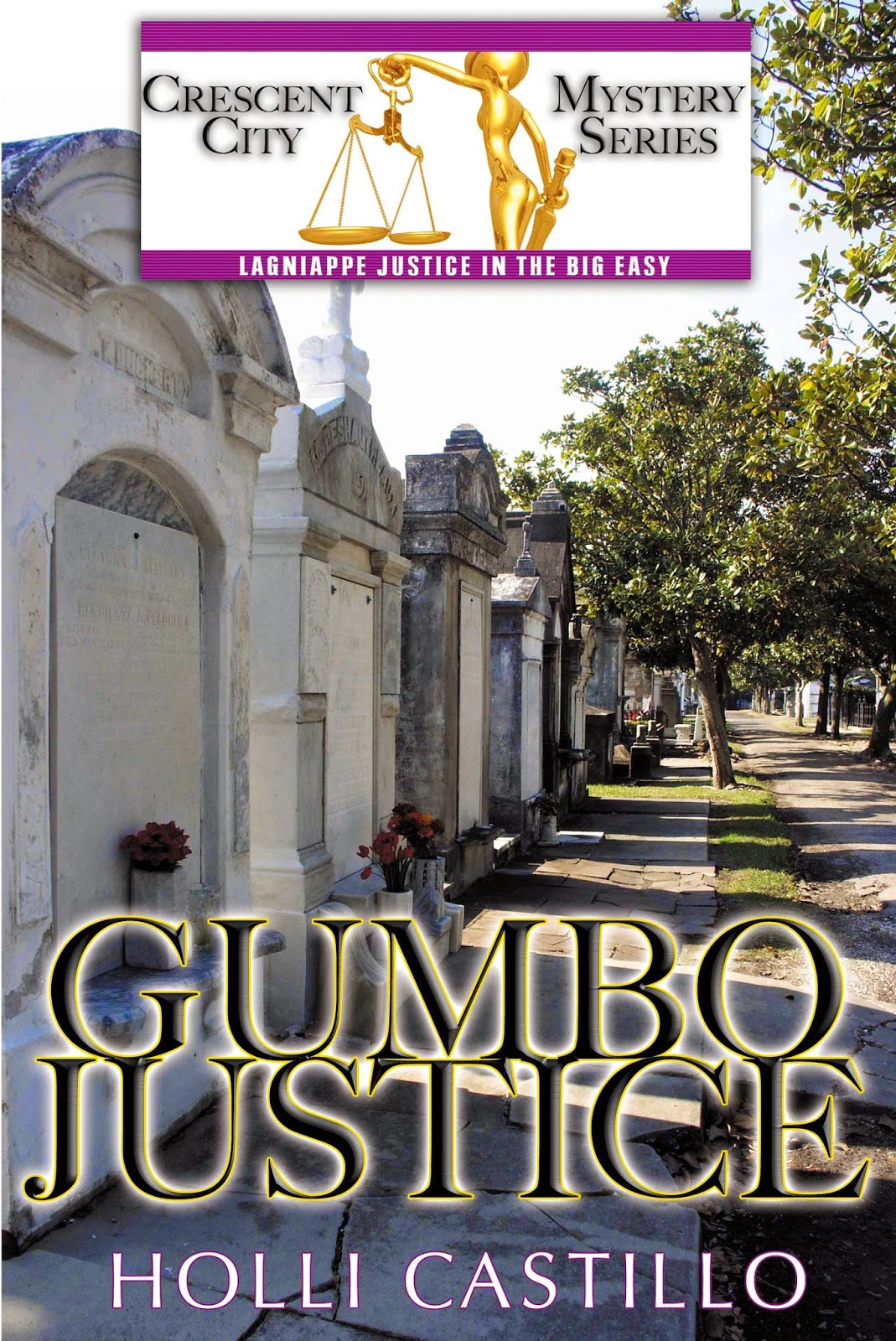 Fortunately, Jambalaya Justice was born without so much drama, although it did take almost two years to write. Currently, I am working on Chocolate City Justice, the third in the Crescent City Mystery Series, which should be out this year. 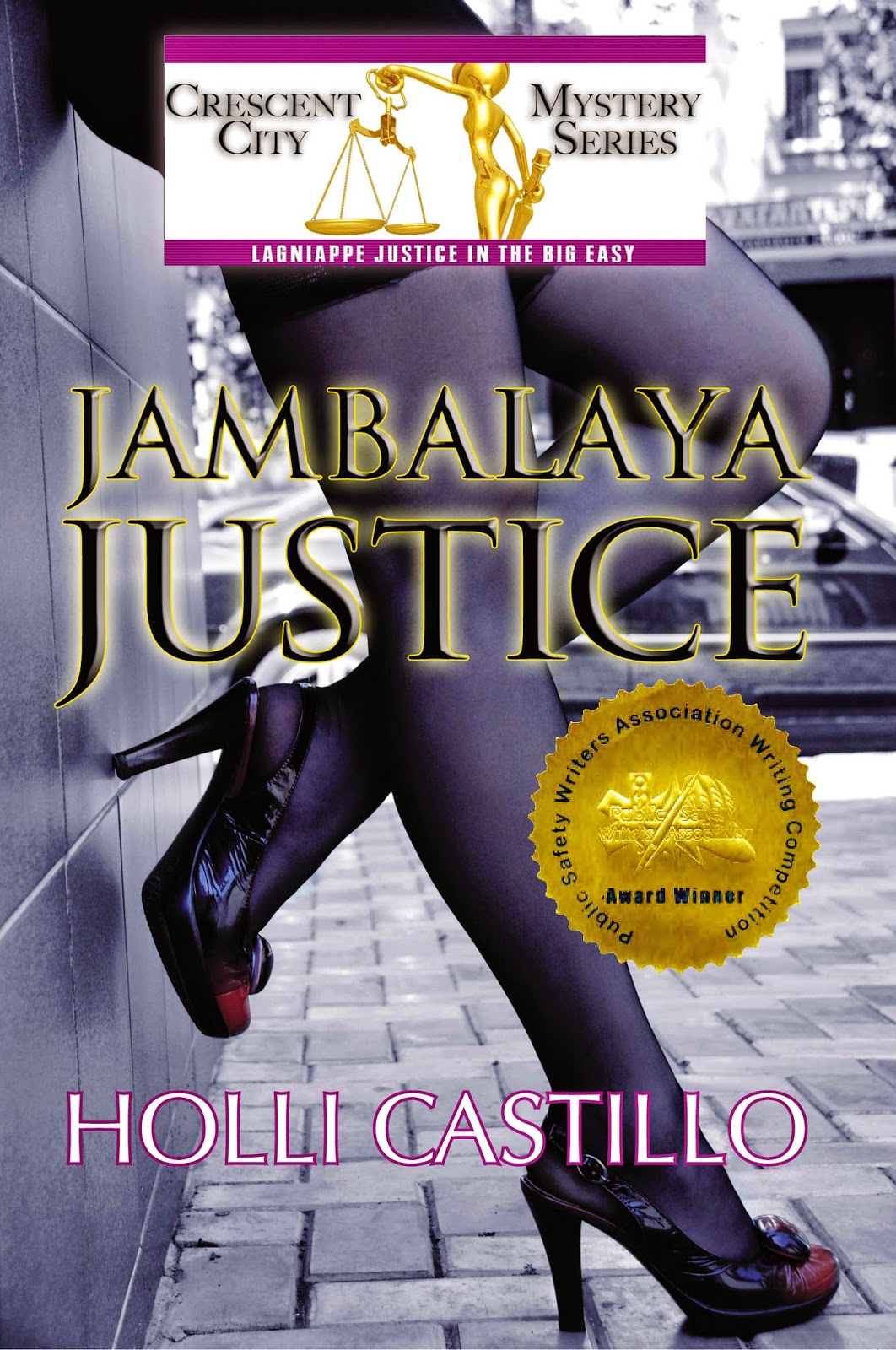 The best advice I can give to other writers is to not give up just because getting published seems tough, but also to pay attention to why you might be getting rejected. Don’t assume that all advice is bad or doesn’t apply to you. Writers have to be confident or they would never want anyone to read what they’ve written, but they should temper that with the humility to recognize when something in the writing isn’t working.


Completing the work makes you a writer. Getting it on the pages to sell makes you a published writer. If you want to move from the first category into the second category and you’re not getting anywhere, you might need to take a step back from the work to figure out why.


The second best advice I can give is if you are going to self-publish, hire a good editor. Even with a publisher and a number of people looking over my manuscripts before they get published, typos or errors get through. I can only imagine how many more would be present if I didn’t have other people doing some of that work for me.


Since I finished writing Gumbo Justice, I’ve had another daughter, adopted two deaf cats and two more dogs, got a guinea pig, and finally bought another car a mere six years after the wreck (you could say I was kind of shell shocked about getting another vehicle.) I still live in New Orleans with my husband et al and anticipate writing about Ryan and her mysteries until my publisher gets sick of me.


Thanks for joining us on The Back Deck today, Holli, and sharing your story! I hope many readers will pick up the Crescent City mysteries and get to know you better through your stories!