If you think about it, writers are a lot like Superman.

Stick with me on this, okay?

I'd like to think that, when he wasn't Superman and saving the world, Clark Kent was a pretty good reporter.  Or at least you'd think he would be after well over 50 years at the Daily Planet.  The point is, no one knew that Clark Kent, journalist, was Superman after-hours or whenever the need arose.

Most writers do not graduate from high school with a degree in novel writing and get hired by a publishing firm and work 9 to 5, Monday through Friday, writing novels and collect a paycheck every Friday (I can't think of a more wonderful--or horrific--way to be a writer, although the Friday paycheck sounds really good!)

Most writers have always been writers who discovered they were writers, much like Clark was always Superman.  He just didn't figure it out until he had to use his super powers to stop a runaway train or pick a burning car up off of an accident victim.  Personally, the discovery that I was a writer wasn't quite that dramatic.

When you're a child or a student, writing is one of those skills which receive a lot of praise, although many times the praise is directed at the correct spelling and the proper use of grammar and punctuation rather than the actual story.  On rare occasions, a young person has someone read what they wrote and see something beyond neat margins, no spelling errors, and grammatically correct sentences.  The reader looks at the writer with wonder in their eyes and says those words that every writer longs to hear: "Wow... you should write a book!"

That is the moment the runaway freight train is stopped and the day is saved.

It's also the day a lot of writers suddenly start looking for phone booths (note: if you were born prior to the advent of cell phones, please ask a person over the age of 30 to explain what a phone booth is.)  Because somehow, once it's said out loud, becoming a writer is something that is done on the sly.  Because no one really BELIEVES the writer will someday write a book and get it published. Because everyone knows that writers starve and need a "real" job to make a living and the writing is just a nice little hobby.

So we look for our own "phone booth"... a place where we can write our stories, study the craft of writing, maybe even type out a query letter (while glancing nervously at the door in case someone walks in), and then return to the "real" world and do our day-to-day tasks and work our "normal" jobs and act like we haven't been doing anything special. 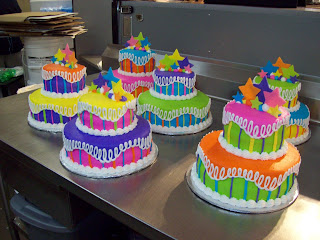 For me, THIS is "normal"....
My "Daily Planet" has been the Walmart bakery for the last 15 years... cake decorator by day, writer by night (or whenever I have a pen and paper handy.)  When I finally signed a publishing contract with Oak Tree Press a few months ago, telling the news was a little awkward.  The prevailing response was, "I never knew you were a writer!" (I'm sure Clark Kent got that a lot... or would have if people ever found out what he really did when he went down the hall to bathroom to wash his hands!)  I just mumbled an apologetic something-or-other and then answered the usual questions: "What's it about? When will it be out? Are you going to give me a free copy?"  It's no wonder Clark preferred to remain anonymous.

And still the daily toil continues.  "End of the Road" will be released in a few weeks, but the debut novel of an unknown writer with a small independent publishing house is not about to let me be able to drop the Clark Kent cover and be Superman full-time (why do you think I still buy a Powerball ticket every week?)  But even so, there is a benefit to toiling away at a "real" job.  You get to interact with people and experience life so as to add a touch of realism to your stories; you get paid regularly, if not particularly well, which helps if you like things like food and shelter; and the most important, for me, is that when you don't get a chance to do what you love all the time, it makes the time you spend doing it even more precious and enjoyable.  Of course, the dream IS to be able to wake up in the morning and head straight to the laptop with a cup of coffee in hand to work on the latest work-in-progress rather than slog in to work at 4 a.m. and sling frosting for 8 hours... but some part of me will always be grateful that I found a channel for my creativity that allowed me to make a living while working on that dream-in-progress.

I think Superman--and all super writers out there--would understand.
Posted by Amy M. Bennett at 3:10 PM