Where the Words Are

I recently updated my cover photo on my Facebook page. To most people, this is about as exciting and daring as brushing their teeth, but I don't change my cover photo every day. In fact, the one I had previously had been in place for about three or four years and it showed my laptop on a table beside a cup of coffee. It was taken at what I called my "branch office" for several years... Sacred Grounds Coffee and Tea Shoppe in Ruidoso, New Mexico. I called it my branch office because, when I wasn't home, it was the place where I did most of my writing and the photo seemed a fitting representation of me and what I loved to do.

The new photo was taken a few days ago and, ironically, it brings me back full circle to my original "branch office". This photo was taken in the Eugene Manlove Rhodes Room at the Alamogordo Public Library. A little background: when Paul and I were married in 1988, we made our home in Alamogordo and lived about a block away from the library. Money being tight, as it is with most newlyweds, the library provided me with hours of free entertainment as I checked out piles of books every week. As time went on, and my interest in writing grew, it became a place where I could lose myself in my writing world. Since I didn't have a car and laptops were still in the future, I would walk to the library with a notebook and pen and sit in the Rhodes Room (also known as the Southwest Room) and lose myself in a world of my own making. 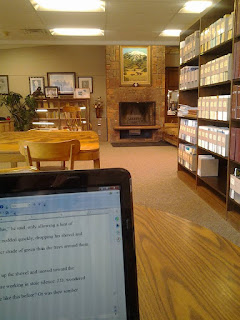 As you can see, the Rhodes Room has an almost homey feel to it. It's been remodeled since those long-ago days, but the artifacts and writings of Eugene Rhodes are on display along with the works of several New Mexico authors. It was here where I fell in love with the literature and stories of the Southwest and, in particular, my adopted home state. I came to know those writers as friends and mentors. When I sat down to write, I felt their hands on my shoulders, I heard their words of encouragement in my ears, and I thrilled to the idea of joining their ranks.

In 2001, we moved to a more rural area, a village called Bent which is about 25 miles from Alamogordo and then, for twelve years, circumstances had me commuting to Ruidoso for work, about 25 miles from Bent and nearly fifty miles from Alamogordo. It was with some regret that I had to leave the "nest", so to speak, but for this fledgling writer, it was the way to test my wings. Working in Ruidoso brought me into contact with the area that would come to life in my Black Horse Campground series as Bonney County... a place that, though fictional, embodied the spirit and flavor of New Mexico. And after I found a publisher and saw my words and my stories be published, I made my way back to the Rhodes Room for book talks and signings, with the enthusiastic support of the Alamogordo Public Library staff.

So when I have time and I want to touch those roots, I find myself back in my corner table in the Rhodes Room, putting words down and creating stories about the people and the places that I love. I take those places everywhere I go. And I feel like I am home.
Posted by Amy M. Bennett at 1:00 AM