The Social Life of a Writer

First off, yes, writers DO have social lives. I know there have been a few who have lived in isolation with only their words keeping them company, with no interruptions and unlimited time to write from early in the morning until late at night. Some days, when everything and everyone is vying for my attention when I'm on a deadline and precious writing time is slipping away, I actually envy them.

However, I do believe it's a myth that writers don't need any social interaction. When I create characters, I have to imbue them with characteristics and traits that ring true. In order for me to do that, I have to get out and meet people, see people, observe them, and occasionally, engage them in conversation. Now lest my friends and family--the people I primarily associate with--become alarmed at the prospect of being analyzed for use in one of my stories, (keep in mind I DO write murder mysteries!) rest assured that you're not going to appear at the Black Horse Campground only to depart in a permanent manner! Mainly, you all are my vehicles for getting out of the house and being in a place where I can observe total strangers.

You won't catch me looking at my phone constantly when I'm out. I'm a people watcher. There is a lot more drama, humor, tragedy, you name it, going on in the real world among real people than you'll ever find on Facebook.

So where does THIS particular writer go to find a social life? Not the movies. I know many people consider this strange but for me, sitting in the dark for two hours, staring straight ahead and not speaking to the person next to you is about at exciting as sitting on a crowded plane and doing the same. And almost as expensive. I can't see much opportunity for socialization in going to a movie. No, my idea of socialization is going where I can see and hear people interacting with each other... or with no one at all.

Coffee houses are great, especially if you decide to venture out on your own. Of course, hiding behind a laptop gives you a great vantage point for observing others who are engaged in conversation. Some mornings, however, I often walk in to my favorite place, Sacred Grounds in Ruidoso, New Mexico, only to find every table occupied by other people lurking behind laptops, with notebooks and pens scattered around them and cups of cold coffee at their elbows. The looks we exchange say it all: "Rats, ANOTHER writer! I need REAL people to observe!"

Restaurants are also great. Watching what other people eat (or don't eat) and how they interact with others at the table can tell you a lot about their personalities. I personally like wine bars. On the now-rare occasions when I can work my part-time job behind the wine bar at Noisy Water (also in Ruidoso), I get a good long day of listening to conversations and engaging people in conversations and, the most interesting, watching total strangers interacting with total strangers. There's something about the atmosphere that acts like an ice breaker and suddenly people are pulling their tables closer together and having a great time, talking and laughing as if they'd known each other all their lives. It's a great way to learn how to introduce a character! 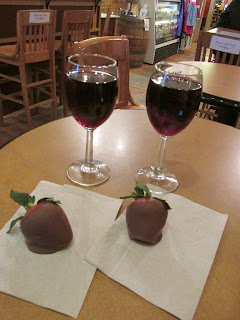 Oh, the things I do for the sake of my writing!

There are many other places I like to get out an socialize. Not all of them are my cup of tea, but anything from festivals (wine or church), water parks or amusement parks, parties at other people's homes (sometimes, you can't turn down invitations if you want to be a good writer), and any other places where people gather can be a great way to fill your well of creativity.

So don't be afraid to shut down the computer and get out once in a while. Your writing may become richer for it and you may actually enjoy yourself!
Posted by Amy M. Bennett at 6:21 AM