Yesterday, I wrapped up what, if you'll pardon me sounding a little grandiose, was my first "book tour". That is, in less than a month, I had book signings at four different venues and I did a bit of traveling. It's always exciting to introduce new readers to my Black Horse Campground mystery series and I was glad to have some success in selling books at all the events. Three of the venues were bookstores and, just like having your favorite dessert after a great meal, the last stop was my favorite: Treasure House Books and Gifts in Old Town Albuquerque, New Mexico.

Don't get me wrong. I love all bookstores, indie bookstores in particular. But there's something special about Treasure House. For one thing, it's tiny; "cozy" is probably a better word, but in comparison to a lot of other bookstores I've been in, tiny is the word that fits best! Another thing is that Jim and John Hofsis, the father-and-son duo who own and run the store, are simply terrific people. They love books and they love New Mexico. So while other bookstores have had a run of traffic this week of readers eagerly lining up to buy Harper Lee's new novel, John just smiles and tells people, "No, I don't carry it and I don't plan to."

Because Treasure House deals exclusively with New Mexico--books about New Mexico and books by New Mexico authors. Whether it's fiction, non-fiction, children's books, whatever, if the main focus isn't New Mexico, you won't find it at Treasure House. And that's a good thing. When was the last time you walked into a "big box" store and found an entire shelf, let alone the entire store, dedicated to books about your own state?

Since I've become a published author, and even long before (when I was simply a voracious reader dreaming of becoming a published author), I had a special affinity for New Mexico books and authors. Rudolfo Anaya, Willa Cather, and of course, the master of southwest mystery, Tony Hillerman were all authors that captured the unique flavor and sense of New Mexico in their books--the characters and settings, even the stories, could only take place in New Mexico. It's where I wanted my stories and characters to be.

My reading, and my writing, has put me in good company. I've had the good fortune to meet several New Mexico authors: Mike Orenduff (author of "The Pot Thief" series), J.L. Greger (author of the Sara Almquist mysteries), Steven F. Havill (author of the Posadas County mysteries), and the incomparable writing duo of Aimee and David Thurlo, authors of the Ella Clah and Sister Agatha series and award-winning authors of over 70 novels. There are others I haven't met yet and hope to some day: Michael McGarrity, James D. Doss, Jude Devereaux (surprised?), and of course, Anne Hillerman. All of them have, in several ways, influenced and encouraged me to find my own "New Mexico true" voice and join them in a paean to our beloved home state.

At Treasure House yesterday afternoon, I was surrounded by their words and the words of many other New Mexico authors and books, too numerous to name, and I felt at home. I am proud to be in their company, both on the shelves and in person whenever possible.... 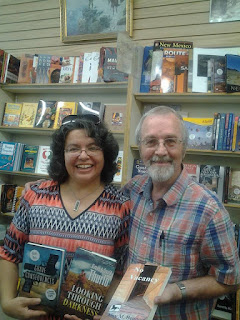 David Thurlo and I, adding to our reading lists... we have great taste!
Posted by Amy M. Bennett at 5:48 AM