If I were keeping track, I'd venture to guess that the question I'm most commonly asked at book signings is, "Are your stories true?"

The fact that I write mysteries--murder mysteries--makes me wonder what kind of life these readers think I lead. 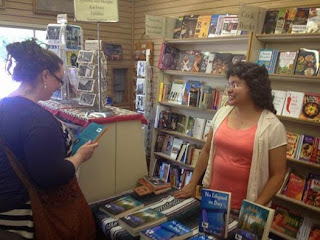 Preparing to be asked the inevitable... but she bought the book anyway!

Anyone who has watched "reality" TV shows knows one thing: There is very little reality in the shows. Just about everything, right down to the "surprise" twists to the story line (yes, there is one!) are carefully scripted. Think about it. Does anyone's life ever turn out that perfect or, more accurately, that interesting? (let's face it--perfect ain't exactly interesting!)

That's where fiction comes in. It's been said that truth is stranger than fiction because fiction has to make sense. I've watched a few episodes of Geraldo or Jerry Springer (very few... at my age, I can't spare too many brain cells!) and a few reality shows (no, not THAT one... or THAT one, either!) just to see what kind of interesting characters I might find. IF--and I do mean IF--those people's stories are true, there is very little to make me feel any kind of sympathy or real interest in them. Their drama, their situations all seem very forced. Few of them make sense. Yes, people do really dumb things and I can feel bad for someone who unintentionally does something stupid and has to pay the consequences, but I have very little sympathy for people who appear to deliberately find the dumbest thing imaginable to do and then react in shock when things go wrong. It's like driving by a car wreck and your attention being momentarily drawn to it but, without knowing the people involved or the circumstances surrounding the wreck, it's not likely to be something you'll care about intimately or even remember next week.

I try to create characters that are sympathetic and interesting, characters that the reader can care about. When bad things happen to them, I want the reader to feel sympathy, to worry about how the outcome will affect the character's life and the lives of the other characters... just like they would for a real family member or friend. But in order for the reader to feel that way, they have to believe that the situation would happen the way it did. While we love coincidences and miracles in real life, when they happen in a work of fiction, the reader simply feels that the writer "cheated" to make the story work out.

But do those characters really exist? In other words, are they based on actual people I know? And did those thing really happen in real life?

Well, that's part of the reality. At one time, I may have seen someone who gave me an idea of how a character looks or acts. I may have heard a snippet of conversation that triggered a story idea. And perhaps I read on the Internet or in the paper about an event or occurrence that planted the seed for a story line. But the rest of the story and the characters themselves grew from those little seeds, watered by my imagination. How often do we place ourselves in the midst of an interesting TV show or movie or book and think, "Now what I would do is...."?

*NOTE*  I will be away most of next week attending my goddaughter's wedding, so next week's Back Deck Blog will be a "re-run" (talking about TV shows....) Hope you'll stop by anyway!
Posted by Amy M. Bennett at 1:00 AM