I spent this past weekend touching my roots in El Paso, Texas, and, more specifically, my Catholic education. My sister's daughter is finishing her eighth grade year at Our Lady of Assumption school, so I still have a vested interest in Catholic education.

Saturday night, the Northeast Consortium of Catholic Schools held a spring benefit dance to raise funds for the two Catholic schools in the Northeast area of El Paso. The school I had attended, back in the day, Blessed Sacrament, closed a few years earlier, but I still have fond memories of the friends I made there (some of whom I still keep in touch with) and the teachers who educated me, so I was happy to attend the benefit. Sunday morning, I helped my sister make a couple dozen burritos and cupcakes to sell after the Sunday Masses to raise funds for the eighth grade class. And, today, Monday, I'll be speaking to the 5th, 6th, 7th, and 8th grade students about writing. Yes, my niece has attained celebrity status by being related to a published author!

It wasn't my idea to attend Catholic school. My father was growing concerned about the the safety of his two daughters at public school. We were making good grades, but he felt something was missing, and he didn't like the increasing violence and lack of discipline he was seeing. So, being from a generation and place where it was his duty to protect the young women in his care, and being unable to be with us every minute of the day, he found a way to protect and guide his daughters' moral, educational, and physical growth.

The sisters were stern, caring, funny, compassionate, and uncompromising in demanding excellence, both in our academic and personal lives. People often paint a horror movie picture of sisters, but I can't believe it; the only people who cared more about us were our parents (even when Sister Angelita was threatening to remove our tonsils through our ears if we didn't quit horsing around and pay attention--and God help you if you were chewing gum in class... or worse, on your way to weekly Mass!)

The sisters taught us to diagram sentences, speak publicly in clear, well-modulated voices (without a single "um"), and do long division in our heads. They demanded neatness in our handwriting and appearance. Slouching wasn't permitted in class, let alone in church. Bullying was not a problem in our school; the sisters didn't permit it. We were not just classmates, we were family, even if we weren't all friends. And more than anything else, they believed in us. We were going to succeed in our lives, whatever success meant to us, because they knew we had it in us to do so.

Long after I've left their daily influence (I graduated in 1985 from Father Yermo High School), I still can hear the sisters urging me to keep trying; to never settle for less than my very best; to sit up straight, chin up, look 'em in the eye, and speak up ("There had better not be gum in your mouth, young lady!") I learned so much more than just how to diagram sentences and write neatly; I learned skills that aren't taught in schools anymore or even at home in some cases. And a lot of those skills are just as important to me as a writer as writing a grammatically correct sentence.

I know they still pray for me and the ones who have already moved on to their reward (and I hope they received a share of mine; they deserve it!) continue to watch over me and guide me. I hear their voices echo in my memory and over my shoulder when I sit down to write and when I get up to speak about my books. I hope I made them proud.

Thank you, Sister Angelita, Sister Gabriella, Sister Grace, and Sister Maria, and all the sisters who have touched our lives. 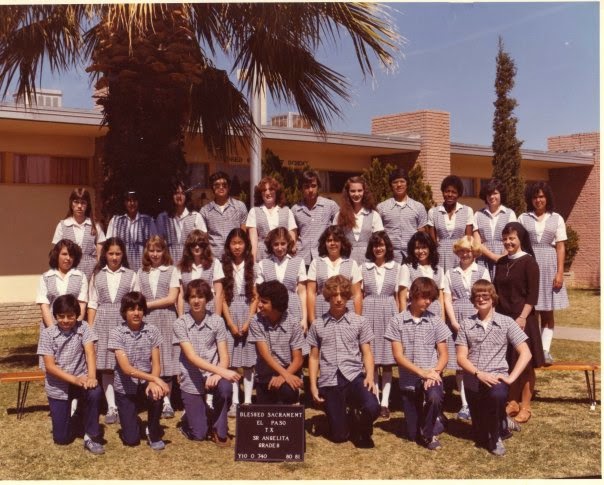 Eighth grade, Blessed Sacrament School, 1981
Sister Angelita is in the middle row, far right
I'm the second one from her.
Posted by Amy M. Bennett at 1:00 AM