In Loving Memory of a Friend and Inspiration

By now you've heard, at least on my facebook page, of the passing of a dear friend and writer, Aimee Thurlo.  To say I am saddened is the understatement of the century.﻿

If you're not familiar with Aimee and her work, here is a thumbnail sketch: Aimée and David Thurlo, authors of the Ella Clah mysteries optioned by CBS; the Willa Cather Award winning Sister Agatha series; the Lee Nez vampire series, optioned by Red Nation Films; winner of the Romantic Times Career Achievement Award for Romantic Suspense; and New Mexico Book Award winner.  Her books have been translated worldwide in more than 18 countries and she has sold over a million Harlequin novels.  But those facts don't do her justice, even in her professional realm. Her other collaborator, Gabriel, her "Velcro dog", because he was always stuck to her!

Aimee was passionate about her work.  She cared about her characters and she cared about her readers and what struck me the most about her is that she wasn't willing to compromise her characters to make a buck.  I attended one of her last book events in Albuquerque back in December when she was promoting her last Ella Clah novel, "Ghost Medicine".  It was the 17th book in the series and she confided that her publisher was wondering if Ella, the main character and a special investigator with the Navajo tribal police, wasn't--at the age of 40-something--getting "too old" to be chasing down criminals.  So she was wondering: should she go back and write a "prequel" to the series, taking her characters back before Ella was a special investigator, back when she was with the FBI in Los Angeles, even back before her father was murdered (which was the catalyst for the entire series), thus introducing us to a completely different Ella?  Should she continue the series, but shift the point of view to another major character, namely Ella's cousin, Justine Goodluck, who was also her partner in the department, and keep Ella in the periphery?  Continue the series with Ella as a private investigator?  Or should she just end the series, leaving the characters as her fans had come to know and love them intact?

She had ended the book with Ella leaving the department with the arrival of a new police chief, but with the possibilities of any of the above scenarios playing out in any subsequent books.  Now we know that the series has ended, but she faced the same dilemma with another series, the one that introduced me to Aimee and David and made me a life-long fan: the Sister Agatha series.

The Sister Agatha character, to me, has to be one of the most unique and endearing protagonists ever introduced in fiction--an extern nun in a cloistered monastery near Bernalillo, who happens to be reverent and devout though she solves crimes while riding a Harley (when the monastery's old unreliable car, referred to as "the anti-Chrysler", isn't running) with a retired police dog named Pax riding in the sidecar.  If you knew my family, you'd understand that this doesn't really seem as far-fetched as it sounds!

The series ended after six books, although she had quite a following, because the publisher wanted her to make some changes... like not so much praying (Huh? Uh...the main character is a NUN!) and perhaps introducing a romantic interest for the main character (repeat above parenthetical phrase!)  Needless to say, Aimee refused to compromise her character, even if it meant ending the series.

The other thing I admired most about Aimee and David (because it really is Aimee and David; I can't think of them any other way) is how they personified "teamwork".  They were a team in every sense of the word.  They were married three weeks after they met and when David came home one day from teaching middle school and found Aimee writing a novel in longhand on a legal pad, he started looking over her shoulder and thus was born one of the greatest collaborations in fiction writing.  They could write in one voice and one's weakness was the other's strength.  And so it was throughout their marriage, their life, and their writing career, until the very end.

I had the privilege of meeting them a couple of times (no small feat considering the busy lives they lead!) and it was an honor to me, an unknown author, to have the friendship and encouragement of a couple of "big league" authors, though within seconds after meeting, you'd think we had been friends for years.  Aimee encouraged me and cheered me on, even prodding me to consider writing for Harlequin's Heartwarming line of romances (I regret I didn't take this step while she was still here to mentor me, but in her honor I will go for it!)

Also in her honor I will be dedicating the second book in the Black Horse Campground series, "No Lifeguard on Duty", in her memory and to David.  They showed me what the real dream I wanted to live was all about: not literary and financial success, but being able to do what you love with the one you love beside you, working with you toward a common goal, and staying true to yourselves. 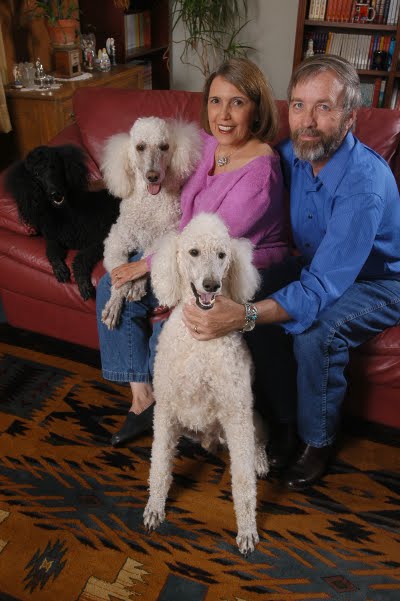 Requiescat in pace, my dear friend.  You will be missed by many.﻿