In case you all didn't notice, especially if you live in the midwest, the sky got darker today and it wasn't because of a tornado or thunderstorm.

There was a total solar eclipse, a rare astronomical event, was last seen in North America in 1979. The next one won't be until 2024. As with this year's event, unless you live in the path or plan to travel to see it, your best bet is to watch it on TV or via live stream. As with most people across the country, we were treated to spectacular cloud cover which created an eclipse of sorts--one that happens several times a week--and literally eclipsed the real eclipse.

Perhaps it's because it can be dangerous to watch this natural phenomenon, or because we were not in a prime viewing location (and had no plans to travel to one), or maybe it's because there has been so much hype about it, but I wasn't overly excited about watching the eclipse. True, it's an uncommon occurrence and it's cool to think of daylight being obscured in the middle of the day and the attendant weirdness (roosters crowing midday, owls and bats coming out in the middle of the day, etc.) does pique interest. But really, what about every day events that deserve our attention?

The sun sets every day, but not every day brings a spectacular blaze of color to the western sky. When was the last time we appreciated a sunset? Or a sunrise, when the morning is cool and the birds are just waking up and starting to sing and the sky begins to lighten? Or a thunderstorm with jagged lightning bolts lighting up a night sky or curtains of rain drenching the land and helping things grow?

It's easy to grumble about a sunset blinding us as we drive home at the end of a long workday. Or about having to get up early with too little sleep to get to work. And of course, there is scarcely a person in the world who hasn't cursed a rainstorm that causes canceled plans and power outages and other inconveniences.

Maybe if we only could experience those things as rarely as an eclipse would we be able to appreciate the little miracles that happen around us every day. 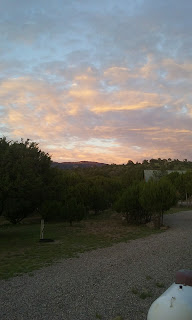 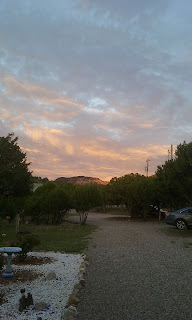 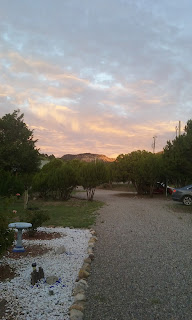 The sunset from our house, three days before the eclipse
Posted by Amy M. Bennett at 2:18 PM