The Best Place to Sell Books

This past weekend was one of my busiest (overall) and most successful (as an author) I've had in the last three years!

A couple of months ago, I signed up to do a book signing at one of my favorite bookstores in the world: Treasure House Books & Gifts in Old Town Albuquerque. The owners of this fiercely independent bookstore sell only books set in New Mexico, by New Mexico authors. Based on that criteria, I'm sure many people would be impressed by the number of books they carry. Anyhow, knowing from previous experience that the first book in a series is always the best-seller at a signing, I made it a point to stock up on over a dozen copies of "End of the Road", the first book in my Black Horse Campground mystery series.

Then three weeks ago, our parish church announced they would be holding an apple festival as a fundraiser the day before the book signing in Albuquerque, and they were looking for people to sign up for arts and crafts and other booths. It occurred to me that this might be a great way to help out my parish, encourage some fellowship, and maybe sell a book or two. I already had my book order for my Albuquerque signing, so I figured I could set up a table at the apple fest, eat some great festival food, and chit-chat with the neighbors and other locals. If I sold a book or two, it would all be gravy.

Little did we expect that we would have a lot of impulse festival-goers stopping in on their way to Ruidoso for the Aspencade festival. People from as far away as San Antonio (among other out-of-state places) pulled off the highway to check out our little festival. Not only did we sell out of apple pies and fiesta food, I sold 17 books. I had 40 to start with. And of those books, only six copies of "End of the Road" were going to make it to Albuquerque.

The next day, I arrived in Old Town Albuquerque with five minutes to spare for my event (that included being dropped off on the opposite side of the plaza and hoofing it through the crowds of people who had descended on the Duke City for the annual hot air balloon festival.) I no sooner set foot in the door when a woman pounced on me to say she had been waiting for me and did I have the first book in my series available? Turned out that Jim and John (the father-son duo that runs the bookstore) only had about five copies of my books available and none of them were "End of the Road". The customer graciously agreed to wait until my husband, Paul, had found a parking space (two blocks away) and brought my box of books to the shop.

Over the next two hours, I sold a total of 13 books (including the six copies of "End of the Road".) That's 30 books in a 48-hour period. Not enough, of course, for me to make the New York Times best-seller list, but enough to learn something important: you never know what places will be great for book sales. Honestly, I didn't consider the church fiesta a "real" bookselling venue. I did it more as a courtesy and a way to help out my parish. My cup runneth over, folks! And being able to score a slot at a bookstore on a busy weekend was a huge help, too. In Albuquerque, I met people from Oregon and Washington in town for the balloon fiesta who bought my books.

If there is one thing I learned that I can share about this weekend, it's this: never pass up a chance to sell your books. Readers are everywhere. You can't wait for them to find your book. Sometimes, you have to take your book to them. 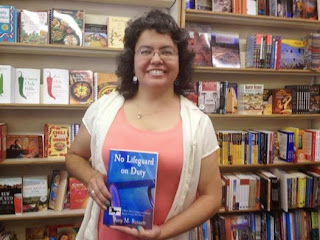 Me, at a previous signing at Treasure House (and still wondering how to get people to buy Book 2!)
Posted by Amy M. Bennett at 1:00 AM