When I visited the California coast for the first time two years ago, I recall sitting on the beach at Carmel by the Sea, just watching the waves roll in. Over and over, I watched as what looked like a mere "bump" in the water slowly moved toward shore, gaining momentum and speed and height until it was a foaming wave that crashed onto the beach and then swept back into the water. It seemed like I would never get tired of watching that, even though it was essentially the same thing, over and over again.

To me, it was just like that at my last book launch. So much goes on under the surface of the "wave"... the months of writing, editing, polishing, correcting, re-writing, then the printing stage, and all the time there are a lot of other things going on below the surface: pre-publication promotion, advertising, lining up events and book talks, ordering promo items and generating a lot of "buzz" and pre-pub interest in the book. When the launch finally takes place, it's like the wave hitting the shore: a huge, beautiful, roaring splash.

And then it slips back into the sea. To start again. 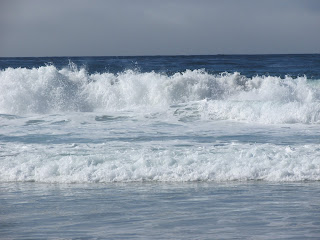 Most people only see the splash. The roar of the wave as it approaches the beach drowns out the quiet work that goes on below the surface. The long days of writing, the countless rewrites and edits, the moments of worry and despair over how the story isn't going the way that was originally planned are all the things going on that are helping to build the wave.

Last weekend at my launch party for "At the Crossroad", there was a lot of "splash" going on (mostly wine going into wineglasses, but....) and I think everyone enjoyed it as thoroughly as I did. But for me, it was more than just watching the waves create their own music on the sands. It was the knowledge that I had created the music, the melody, the lyrics just below the surface, during those times that the "wave" was building out in the ocean. Few people ever see what happens below the surface; only a few more even think about it or are aware of it.

The thing that fascinates me the most, however, is how the cycle seems to repeat itself endlessly, effortlessly. Oh, I know that it's not effortless. But the effort is part of the beauty of the wave. And just as I sat on that beach and felt I could have watched those waves forever, I feel the same way about writing.