Why I Love Having a Second Job

The title doesn't refer to my writing; though I don't give it the priority in my life that I should, I really consider it my first job. And I'm not talking about my cake decorating job, either. In the "real world", that is considered my first job since it's the one that pays the bills and dominates most of my waking hours during the week.

A few years back, out of necessity's sake, I took a part-time job at Noisy Water Winery in Ruidoso, New Mexico. I didn't know much about wine but, having visited the place a few times, it seemed to be a fun place. And the wine was good, much better than the stuff I occasionally bought from the supermarket. Looking back, I see that my employers took a much bigger chance by hiring me; I was older than most of the other employees and I was basically clueless about what we were selling, plus I couldn't give them full-time hours since I already had a first job.

Four years later, neither of us seems ready to give the other up!

Never has "on the job training" been so rewarding and fun. Where else can you get called to the manager's office and be told "bring a wine glass with you"? Not many businesses have employee meetings that start with, "Grab some pizza and a glass of wine and find a seat." But there is much more that I love about my second job than just the "perks".

I've learned a lot and those of you who know me well know that this is always something I love! I may not know everything about the process of making wine or all the facts and figures about the different varietals, but I do know that I've had a lot of fun learning what I do know and sharing it with customers who are, like I once was, too intimidated by wine to really enjoy it.

I've also had the privilege and pleasure of working alongside a fun group of people who have helped me learn along the way. The group has changed over the years, many have come and gone, but each one has touched my life in a unique way. Make no mistake; there's a lot of hard work involved but when everyone pitches in and helps each other out... well, at the risk of breaking into a rendition of "A Spoonful of Sugar" that no one wants to hear, I'll stop there and know that you understand what I mean!

One of the best things about working in the winery has been meeting new people. I've met many others in the industry, winegrowers, winemakers, and tasting room workers, and most of them have been the friendliest people I've ever known, all of them eager to share what they know and love. The same goes for many of my customers. Sure, there's the occasional wine snob who won't find anything they like, no matter what you offer them, but most visitors to the winery are looking for fun. What better place to find it?

It's that type of work experience and atmosphere that feeds me as a writer. It's true that many times it's very tiring to hold down just one full-time job, let alone a part-time job with very little "down time". But I love to stay busy. The creativity required by my cake decorating job feeds the creativity I need to be a writer. But the interaction with the people that surround me in the winery makes my creativity easier to relate to. Just as I want to "de-mystify" wine so that others can enjoy it, I want my stories to be easy for other people to enjoy by creating characters they can identify with. That's a skill I practice every time I set a glass down on the bar and strike up a conversation with a new customer.

Maybe that's why I write better with a glass of wine by my side.... 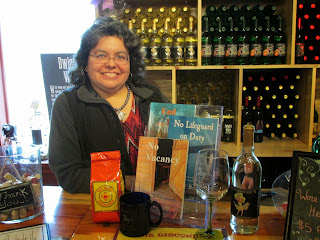